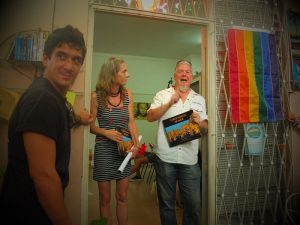 Our new book is published – now “Cuban Harleys, mi Amor” was introduced locally in Havana. In the bookstore of  author Conner Gorry in Vedado, we were the first to introduce a public audience the book. It was especially cool that some of the protagonists, at issue in the new factory, were on site.

So even Rockstar David Blanco, “Che” Guevara looked-son Ernesto and Adriana, the only woman who rides in Cuba Harley, past. But other Harlistas as Salgado, Chukin Chao, Luisito or Gustavo Fernando were there. “Cuba Libro”, as is called the shop on the corner of 19th and 24th Street, burst well, almost at the seams. Typical Cuban started the idea with two hours late, but no one bothered that there was but until then enough red wine, Cuba Libre or other refreshing drinks. On the contrary, to 19 clock the last interested had appeared, so nobody missed, as landlady Conner briefly introduced the book and publisher Jens Fuge told how he two years earlier ‘fell in love during Harley meetings in Varadero spontaneously in Max Cucchi photos and Italian photographer of six in the morning clock arrived at the airport in Miami, in order to arrange with him contract details. Anyone could take one of the beautiful posters and a scroll of view specimens that were available. The right book party there will be next year in Varadero, when the 5th Harley meeting is scheduled. The date has already been set: from the 5th-7th February. More: www.wowcuba.com/cuban-harlistas-2016 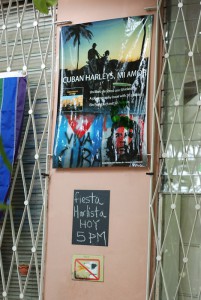