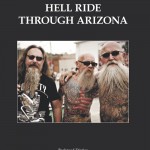 A thrilling report, a trip to the roots of the American MC-Scene. Hells Angels Sonny Barger and Johnny Angel are without doubt the most famous and oldest bikers of the world. Not enough that they were they founders of the Hells Angels’ reputation  in the early 60’s they lived this special life style all their life. Author Jens Fuge managed to pay a thorough visit to both legends and talked to them extensively. As their guest he moved around freely on their properties and Johnny Angel even offered him the spare bed of his residence. They rode together, they celebrated the 56th and 54th anniversary of both Angels, the watched the premiere of the new Barger-Film “Dead in 5 Heartbeats” together.
This book does not only offer these unique insights but also offers also many intimate and rare pictures as well as some interviews which the author conducted.
Respectfully and at not times sensationally the author gets close to both elder gentlemen who made biker history.
Moreove chapters tell about his trips with the Hells Angels to a boxing event  and to the Western town Tombstone, about a trip to Los Angeles where the ALMA MC carried a brother to grave who died in an an accident, about parties of the Black Riders from Soulbrothers MV as well as about the Loners MC and about colorful Harleys and dancing Bikers.

Fuge, insider of the scene, provides the reader with an interesting and deep insight into the Arizona biker club scene. And this without having to evoke base instincts or to conjure up prejudices. This is Gonzo-Journalism at its best likei ts inventor  Hunter S. Thompson used to celebrate it. Of course Fuge is not a Thompson but he takes his mission as serious as Thompson and he is right in the thick of the action. A representative of the good old report.
The series “Backroad Diaries” carries its program already in its name. As a matter of fact you have the best experiences off the beaten track and Fuge has never been into mainstream. You can be anxious to read the coming publications. Cuba, where the Leipzig Journalist roared across the island together with the son of the great revolutionary Che Guevara on ancient Harleys will be the next on the list. Russia and Ukraine, an old school trip to the North Cape via Murmansk, Route 66 and the Isle of Man are also to follow.  Enough reading material for the following years is guaranteed.

There are no reviews yet.